“What good is the warmth of summer, without the cold of winter to give it sweetness.”
– John Steinbeck

Ever had the winter blues? Where you just want to curl up in a fetal ball with a blanket over your head.

I learned an amazing lesson from the almost nearly perfect people that will help you brighten your blues.

The coldest place on Earth I’ve ever been is where I grew up. It’s raw, skin cracking, snot freezing cold. But no matter how low the mercury on the thermometer, the sun will shine.

In fact, the state motto for South Dakota used to be, “The Sunshine State,” until someone realized that Florida had cornered the market on that one. (For future trivia play, it’s now called, “The Mount Rushmore State.”)

I moved to Oslo, Norway last October and encountered true darkness for the first time.

Although Oslo is not as dark as some cities in Norway, such as the northern city of Tromsø where there’s no sun at all during the winter – only the moonrise and moonset. Oslo is still dark.

In early November, we lost 6 minutes of daylight per day. By mid-November, it was pitch black at 3:30 pm. By the end of the month, it was dark all morning, dreary and overcast throughout midday, and black by early afternoon.

I was no longer able to discern when evening began, so I bought electric candles with automatic timers set to light at 6:00 PM, thus signaling the start of evening.

This is when the dark began to suffocate me.

Norwegians told me that November was the worst month of winter because it was cold and dark, and there was no snow on the ground.

Snow, they said, was the key to enjoying a Norwegian winter. One, its whiteness brightens the long, dark days. And two, you can go cross-country skiing.

This dimmed my already gloomy mood because snow and snow skiing were sore subjects for me.

One, my childhood was full of memories of getting snowed in at home, which meant I missed dances, parties, and other teenage events of critical importance.

And two, my dear parents were both workaholics who enjoyed attending Democratic fundraisers and political rallies in their rare bits of free time. So while my friends took fabulous ski trips to the Black Hills, my parents drug me to Democrat Party pancake feeds.

In short, I associated snow and skiing with being stuck at home and missing the fun.

Returning to winter in Norway, something extraordinary happened last December.

It was another dark, dreary day.

I was dreaming of taking a sun holiday to, well, anywhere. Then, I looked out the window and saw white, fluffy flakes of snow. It snowed for hours, and in no time there was snow accumulation on the ground.

The Norwegians were 100% right: The world was lighter. The snow had instantaneously brightened the whole atmosphere…and my mood.

As the days continued, the snow came and went, and I formed a new love and appreciation for the wondrous white flakes.

After the first snowfall, I saw Norwegians carrying cross-country skis everywhere with huge smiles on their faces. In the tram, on the sidewalk, on the subway, you could barely walk without bumping into a pair of skis.

That’s when I learned that cross-country skiing is not just popular in Norway: it’s a religion.

Norwegians are absolutely mad about the sport. You can earn instant affection from any Norwegian by simply asking them which brand of ski wax they prefer.

I decided that if the Norwegians thought cross-country skiing was the best way to enjoy the dark winter, they were probably right. After all, they were spot on about the snow.

To prepare, I went to the local ski shop to buy all the requisite kit as I owned nothing. I approached a tall, fit-looking salesman and told him I was interested in the beginner’s cross-country ski package.

I gave him a blank stare.

“What temperature do you plan to ski in?”

“Are you interested in track skiing or skate skiing?”

I scratched my head.

“Wait here,” he said and walked over to the children’s ski section and grabbed a set of skis.

“These are good waxlass skis for beginners. They’ll give you a lot of traction.”

I was about to complain until I realized I’d have to answer some of his questions to get more sophisticated skis.

After the ski purchase, I headed three hours west of Oslo to a place called Skinnabu to test out my new gear.

On my first outing, I was nervous and a little shaky, but after a few quick and dirty lessons I started to get the hang of it. On my second day out, my confidence levels were up, and the day was gorgeous. As I set out, the sun was shining, the air was clean, and the surroundings were spectacular. 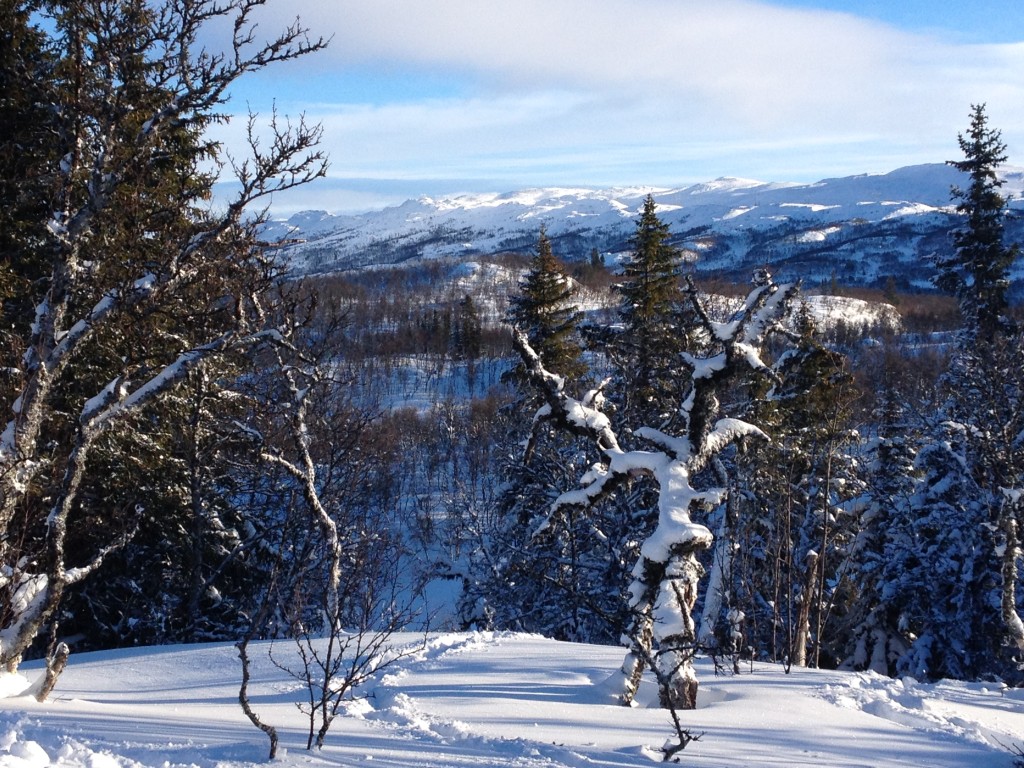 I found the longest trail on the map and started skiing. I’d fall every so often, get in a good stride, get in a bad stride, listen to the nature, and soak in the surroundings. It was heavenly.

When the day was over my only thought was: When can I ski again?

I even counted the number of ski weekends that remained until the snow would melt.

There’s a wonderful book written by Michael Booth called, “The Nearly Almost Perfect People: the Truth Behind the Nordic Miracle.”

In it he reveals why Scandinavians are consistently rated the happiest people on Earth as well as some of the corkier aspects of life here.

Since I’ve arrived to Norway, I’ve been constantly wowed by most Norwegians I’ve encountered. Not only are they amazingly fit and healthy, they seem to move about their day in a relaxed and easeful manner.

I can now say with certainty that snow is the key to surviving the dark, Norwegian winter. Not only do you survive it, you thrive. 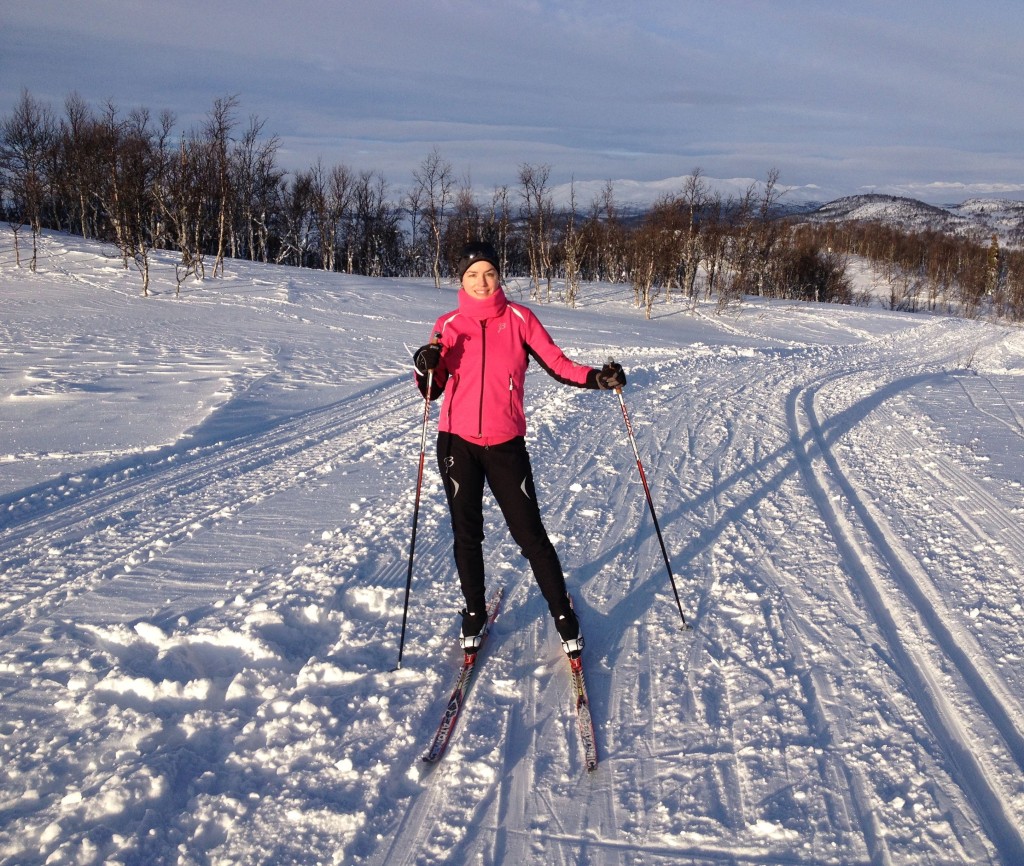 When your world gets dark and dreary, I challenge you to look for the snow: Look for a way to make the dark times lighter. And maybe that way is something you think you’ll hate (as was my case with the snow).

If winter is making you gloomy, then get out of your routine, go outside, connect with nature, learn a new sport, or simply bundle up and do a few snow angels.

Does the weather ever get you down? What do you do to enjoy it instead? Post your thoughts below.

When it's time to put the camera down.
How to Handle People Who Piss You Off

The Secret Step to Quintuple Your Productivity [and Joy]
Scroll to top
We use cookies to ensure that we give you the best experience on our website. If you continue to use this site we will assume that you are happy with it.Ok