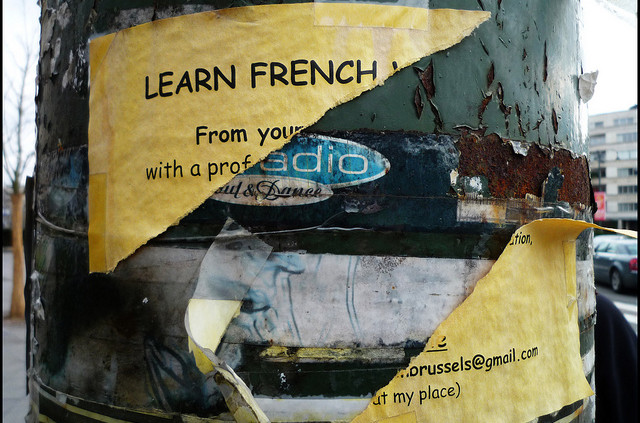 Does time seem to go faster as you get older?

The Proportional Theory posits that as we age, our sense of ‘present’ time begins to feel relatively short in comparison to our lifespan, so a year may feel quicker in old age compared to childhood.

As I get settled into my new home in Brussels I’ve been thinking a lot about the passage of time and regret.

Returning to Belgium has reminded me how much I want to learn French.

I speak taxi cab French now, which is my definition for being able to sustain a conversation of small talk with a cabbie.

But I want to speak better than that, and I regret that in all the years I’ve been traveling and living abroad that I don’t speak the language of Molière. Not only that, I regret not spending more time in my youth learning foreign languages.

Where I grew up, I didn’t have much opportunity to learn foreign languages, nor was much premium placed on how well one mastered the French subjunctive.

I joined the Peace Corps after college and spent two years in Romania. I had laser beam focus to learn Romanian, so I spent hours every day studying, practicing, and struggling. After 2 years, I used colloquial expressions with ease, dreamed in Romanian, and was at times mistaken for being a local at the onset of conversations.

After the Peace Corps I lived in many other countries, but the professional working language was always English. When I joined NATO, I was working with people from 28 nations, but the common language we used was English.

Americans have a reputation for being bad at languages, but it’s a bit unfair. Most Americans don’t have the opportunities to learn foreign languages nor is there a need when the lengua franca is almost always English.

This has made me both frustrated and lazy.

Frustrated because it’s harder to learn a foreign language when everyone around you is speaking English.

Lazy because even the most gifted linguists must clock in a lot hours conjugating verbs and mesmerizing vocabulary. And I haven’t clocked in those type of hours in French.

So yes, I regret not spending more time learning languages in my youth, but more than that, I regret not doing more as an adult when I had opportunities and elected not to take them.

With the passage of time seemingly speeding up each year, it can make the regret poke sharper.

So with that off my chest, what do I do now?

Continue to wallow in regret?

Criticize myself for not transcending the regret sooner?

I turn regret into motivation.

When I spend time each day studying French, even though my French is still comme ci comme ça, my regret dissipates.

If I’m learning, I’m where I want to be. I’m here, right now, not concerned about the month or the year or my age.

And when I feel regret wiggling its way to the forefront of my mind, I use it as a gentle reminder to immediately set aside 20 minutes to language learn.

I use the regret for motivation and empowerment.

In this way, I don’t blame my upbringing, my work environment, or my nationality for why I don’t speak better French. I take responsibility for all the things I want to create in my life. And that feels pretty damn good.

Is there a skill that you regret not spending more time learning? Do you still want to learn to do it?

If yes, I challenge you to start learning TODAY. (My Bold Action Challenge is an excellent opportunity to focus your efforts.)

Allow the regret to dissipate when you’re in the act of learning.

Put your focus on the fact that you’re learning, not that you haven’t learned yet.

Give it a try today, and see how good it feels.

And if you liked this post, I’d be so happy if you shared it with a few amigos.

3 Key Components to Creating the Perfect Work Space
Scroll to top
We use cookies to ensure that we give you the best experience on our website. If you continue to use this site we will assume that you are happy with it.Ok